In 2019 the Colline del Prosecco di Conegliano e Valdobbiadene were included on the World Heritage list.

THROUGH THEIR COLOURS, AROMAS AND TASTES WINES TELL A LOT ABOUT THEIR ORIGIN SITE AND ITS INHABITANTS.

There is always a significant bond between wine, wine-growing site and people.

There are two reasons why our winery is called La Svolta, which means turning point. On the one hand the name recalls the turning point in our family history coincided with the construction of our new winery, the place where the most innovative vinification methods enhance our forefathers' traditional knowledge. On the other hand it refers to the position of our winery, which lies near a turning point in the road descending from Santa Maria di Feletto town, a small hamlet of San Pietro di Feletto city.

From here one can admire the gentle Alpine foothills, where the famous production area ot the Conegliano Valdobbiadene Prosecco Superiore DOCG is located. 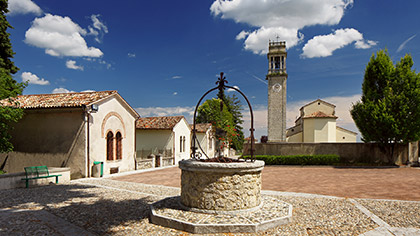 The fascinating Colline del Prosecco di Conegliano e Valdobbiadene are dotted with old towns enshrining the history of viticulture. San Pietro di Feletto boasts a varied natural landscape characterized by woods of tall trees and ferns (“filix” in Latin, hence the name Feletto), green valleys and beaten paths through a karst area scattered with springs and small caverns called grotte dei Landri e dei Landron. Very appealing is the view of the Eremo Camaldolese, an ancient hermitage dating back to 1670, which used to be a pilgrimage site and nowadays hosts the City Hall. 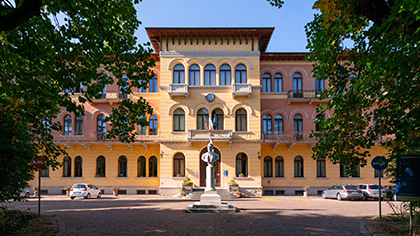 Conegliano, city of art and wine, is just a few minutes away from San Pietro di Feletto. In 1876 it became the seat of the first enology school and in 1966 it launched the first italian wine tour, the “White wine route” which nowadays is known as “Prosecco route”.

Thanks to its lucky location La Svolta is at a very short distance from both Venzia and its enchanting lagoon and the outstanding Dolomiti encompassing Cortina.

The Conegliano and Valdobbiadene Prosecco Superiore DOCG wine production area is located in northern-east Italy, more precisely in the Treviso province, and encloses 15 towns. The area is characterized by a thousand-year-old hill range comprised of forests, vineyards and small villages. A remarkable scenery shaped by nature and human history.
Being exposed to the south and between 100 and 500 metres above sea level, the hills benefit from a good thermal excursion, which means a luxuriant development of aromas. Thanks to peculiar exposure, soil and microclimate, each vineyard produces a distinctive DOCG wine. The skilfull farmers have created a specific system for viticulture resulting in a unique landscape, whose outstanding environmental and cultural value caused the Colline del Prosecco di Conegliano e Valdobbiadene to be on the World Heritage List.